“All the President’s Men” has quickly grown to be one of my favorite films, because of a lot of reasons. One of them is the attention to detail a lot of films forget about these days. But details do make a movie, they can bring more realism to the film and that’s something “All the President’s Men” has utilized very well. There were numerous techniques used and those I’ll discuss in this article.

This film’s about two journalists, Robert Redford and Dustin Hoffman, who’re trying to uncover the details of the Watergate scandal.
One of the techniques used is called split diopter focus. With this technique, a director often tries to put two characters in focus, because the both of them probably have something relevant to say. By using this technique the character in front of the camera will be in focus, and the character in the background will also be in focus. Between both characters is a blurry line. (see image)

But Alan J. Pakula didn’t use it with that goal in mind. He, for example, used it to have the character in focus, but also something completely random. Like a notebook, a stack of papers, a group of journalists talking… There were all of these random things in focus, but why? They don’t have any relevance to the story, so why would he do that? To distract. He’d do that to distract. By having the camera focus on something that’s disturbing our protagonist, we’ll get disturbed by that too. He’s done it to put you in the moment. To have you invested in the story. To have you immersed. 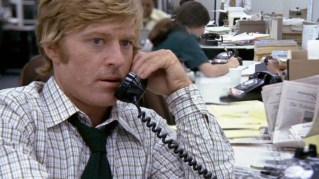 In these images, you can see the use of split diopter focus very well, and you can also notice what’s in focus: totally random items.
This technique was quite popular during the 70′, but also quickly left the film scene. Directors like Brian De Palma have used it numerous times in their films. In De Palma’s films especially you can find it quite often. But the technique wasn’t invented in the 70′. Long before that time one of the most critically acclaimed directors has used it in his cinematic masterpiece: “Citizen Kane”. The director is, of course, Orson Welles.
Nowadays you won’t find this technique as often as in the 70′, but there are a few exceptions. In Quentin Tarantino his films you can be guaranteed to find at least one use of it, like in his most recent film “The Hateful Eight”, for example. But the TV-show “Fargo” has used it too, as has “Ash VS Evil Dead”.

Split diopter focus wasn’t only technique Alan J. Pakula utilized to have the viewer immersed. Another one is, something a lot of films don’t take into account. This is that when characters are standing further away from the camera, the volume of their voice drops. Often enough in movies today all voices are on the same volume regardless of their distance from the camera, but in “All the President’s Men”, that’s not the case. Here you have trouble hearing someone talk from a distance, just like the journalists have trouble understanding what they are saying: you are in the moment. It places you right next to them and it makes you feel like you’re there. You feel like you’re in the film. You feel immersed.

Of course, the technical aspects that I’ve just named help with creating a realistic atmosphere, but there’s something that a movie can’t go without; a script. You can have all of these techniques into your film, but if you want your audience to really pay attention to what’s going on, you’ll need realistic dialogue. In your ordinary film, the dialogue only contains things that are important to the plot, which is understandable, because we don’t want any boring, none-interesting things to know. But if you want your audience to feel involved in the story, you’ll need realistic dialogue. Which was the case in “All the President’s Men”. Here you often had long conversations about nothing, but at the end of it, it contained some very important information, which will cause them to make advancements in the case. You’d have to pay close attention to get all the information you need and have to be selective of the information you want to absorb: just like a journalist. Just like the main characters.  You are invested.