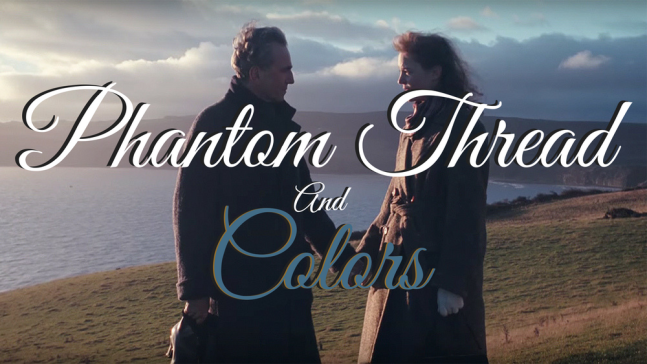 After having waited for months for Phantom Thread to come out, I was more than disappointed to find out that they only played it across the country. Then, a couple of weeks ago, a small independent theater not so far from where I live played it for one week only. After hearing this news, my excitement rose and I went to see the film as fast as I could. The visuals of the film really spoke to me, not only did they look gorgeous, but the usage of warm and cold light and colors stood out, which is what I will be discussing in this article.

Colors play a very important role in the visual ways of making a film. I’ve discussed its importance in two different articles already, Why the use of Color is Important to Film and Why Color Grading is Important to Film. While watching Phantom Thread, I noticed that there was a heavy reliance on cold lighting and that as the film progressed, warm lighting started to come into play as well. Obviously there’s a meaning behind Paul Thomas Anderson’s choices, so here’s my interpretation.

Phantom Thread starts off with a close-up of Alma’s face, while orange light of a crackling fire is projected onto the side of her face. The orange glow around her will become more and more prominent in the scenes she appears in. In this shot, she’s talking to a now still unknown person. The next scene involves the morning routine of Woodcock. Here, cold colors are the more prominent ones; white, different shades of blue and black prevail, both in his clothes, but also in the background and lighting. 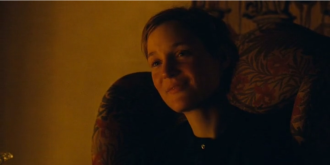 The contrast between the usage of cold and warm colors at the beginning of the film, already tell us a lot about the characters. Maybe not at first, but as the film progresses, things start to fall into place. While watching it, I started to put two and two together, which made me realize that Woodcock and Alma represented the two types of color spectra. Alma was warm and Woodcock cold. Alma would constantly wear red or brown tinted outfits, and in most scenes she’s in, orange lighting would dominate. The color represented her character quite well. She’s the warmth needed in Woodcock’s live. She represents the warmth that should fill in the void that Woodcock’s feeling inside of himself. She’s the missing piece to his puzzle. Her warmth is in harmony with the cold lighting used in the scenes where Woodcock’s the more dominant one. There’s a scene in the film where she’s fitting different dresses of Woodcock, but there’s one where Woodcock notices that she isn’t feeling too well. When she’s asked what’s wrong, she says she isn’t sure and then goes on to say that she doesn’t like the material, and of course, the dress’s main color’s blue; a colder color. Woodcock’s cold color palette represents the coldness inside of him; it represents the emptiness inside of him, made by the passing of his mother. It stands for his inability to truly feel love again.
After their marriage, they start to blend colors together. Woodcock starts wearing earth-tones, while Alma starts wearing blue tints. Both will still keep elements of their original respective color in their outfits, but for the first time they’re now mixing them up.

The Battle for Domination

Domination’s quite a big theme Phantom Thread deals with. It constantly asks us the questions: who’s in control? Who’ll dominate the other one? Who’s the most powerful one? The answers to these questions are made clear due to the usage of color. Scenes where orange and red are dominating, are the scenes where Alma’s the dominant one. Think of the scenes where Woodcock’s poisoned by her and lays down helplessly in his bed, with Alma by his side. The scenes where he’s powerless and tired out, doing nothing, solely supporting on the help of Alma, are all shot with warm light. In these scenes, Alma’s in control. She’s the one deciding everything, and she’s the one getting what she wants: Woodcock for her own, she likes it when he’s vulnerable. The orange that once represented love and innocence was a façade, as she’s really a manipulative sociopath who only uses Woodcock to her own advantage. Then, when Woodcock’s well again, the first scene where he stands up in the morning after a long period of having laid in bed drenched in warm lighting, cold lighting was dominant again; Woodcock’s back in control. He’s the decision maker once again. 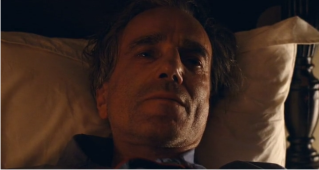 The first morning he’s better, cold light dominates; he’s back behind the wheel.

This is the most obvious example of how the lighting could tell us who’s in power and who isn’t. There are multiple other instances, like at the dinnerparty for example. Here Alama’s in control; she’s basically rueling the party. Everyone folows her, everyone likes her, she can do whatever she wants. Woodcock has to subject himself to this, which he doesn’t like and he becomes frustrated.

At the end of the film, Woodcock becomes angry with Alma, he says that she takes away his confidence and his concentration. He’s talking to his sister about how Alma does not belong in this house and that he sees through what she’s doing. While he’s complaining about her, she’s standing without his knowledge right behind him. The scene’s shot with cold light, showing us that at this moment in time, Woodcock’s regained the power over their relationship. In the scene that follows, Alma’s off to harvest some poisonous mushrooms again to prepare for Woodcock. Then, back in the kitchen, warm light dominates and it becomes clear that Alma’s wearing a green sweater.

The color green represents her envoy towards Woodcock’s power and the warm light in the background foreshadows of what’s to come. Woodcock is aware of what she’s doing, but he’s in on it. A variation of the Stockholm Syndrome has kicked in, as he’s accepted their relationship. Alma’s exactly the type of wife he’s looking for. His maternal issues have made him unable to fit with a normal woman. He was always on the look for a dominating wife, though he doesn’t always want to give up his power. He’s in need of a give-and-take-relationship, and Alma’s able to give him that, for which he both loves her and hates her. As a closure to the film, we’re brought back to the setting the film starts of with. The orange lighting shows us that Alma’s still in control and it’s revealed to us that Woodcock’s laying on her lap, like a child. It gives us the idea that Alma’s won the battle of domination, but I believe otherwise.  I believe that this ending tells us that their relationship will consist out of periods where Alma’s in control, the periods where she can take care of Woodcock and where she can play a maternal role, but also out of periods where Woodcock’s in control, during the times when he’s well and where he can play the dominating role he’ll always want to play. So who’s the true winner? In my opinion, there’s never a true winner.

4 thoughts on “My Interpretation of “Phantom Thread” and its Colors”