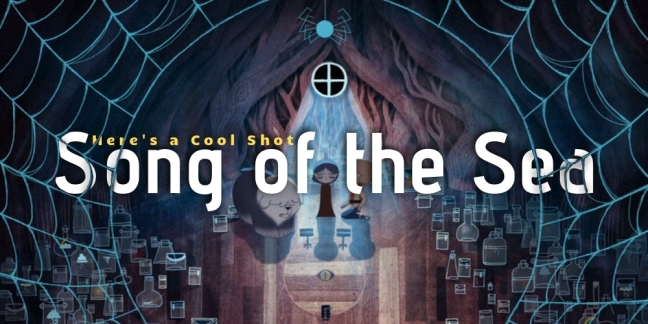 Before the Cartoon Saloon produced The Breadwinner, they made another visually stunning film called Song of the Sea. It tells the story of Ben and his sister with whom he discovers that the fairy tales their mum used to tell them are in fact true, and now they find themselves on an adventure to save fairies that have turned into stone after a witch had taken their emotions and stuck them in jars. It sounds silly, but it’s an endearing story, about the development of a brother sister-relationship, filled with an overabundance of gorgeous shots. It was a hard choice to make, but eventually, I landed on this shot to discuss:

In the foreground, there’s a spider spinning its symmetrical web, and at the center of the shot, in the middle ground, we find the protagonist, Ben, his sister, and their dog, surrounded by jars filled with emotions. Ben is kneeled down next to his sister and is hopelessly looking up at her, while she’s looking down. She’s tired and dying, and it’s expressed via her physicality.  Behind them, there’s a window, lighting the scene. The scene where I took this shot from, takes place at the relative end of the film.

The first thing to notice is something that we can already see in the foreground: the web. The web spun by the spider makes up a frame through which we can see different characters. The shot uses this frame within a frame method to guide our eyes and to add depth. The different lines created by the web, all point towards the middle of the screen, and the symmetricity as a whole, already draws your eyes to the center where the characters are located. Because the web is found in the foreground, it appears to be bigger than it would be in reality, and it gives us a sense of scale as to how big the room is in which the characters find themselves. The holes around the grand, central one, function as tiny, empty frames on their own, bringing balance to the overall composition. The web also gives off a rather unsettling vibe, and it’s quite fitting for it to be there, as the scene takes place in the attic of a witch.

Secondly, its use of perspective is also noticeable. Instead of morphing the wooden floor planks in a way that would create depth, they decided to leave unmodified. It uses the left illustration, instead of the right one, which is more commonly used. The shot achieves its depth by playing with fore, middle, and background instead of via perspective lines. It’s quite an interesting technique and it makes for a cool and unique visual look.

Outside of its unique use of perspective lines, the shots visually interesting in numerous other ways. The lighting, for example, is one of those ways. The moonlight coming through the single window colors the room blue, which generates a sad and somber mood, that’s fitting to the scene. The jars surrounding the characters tie the room together and also carry a certain sadness, as we know that the emotions in these jars once belonged to elves that are now turned to stone. Every jar in the shot is filled with a different emotion, visualized by a few simple images, like a rainbow, a thundercloud or a raincloud, a single sun or a cloud covering a shining sun. Because every jar is relatively unique, the shot immediately becomes more interesting. The jars also make the room feel less empty and they’re a characteristic element of the witch, which makes it easy to tell where the room is located, even out of context.

Song of The Sea is filled with gorgeous illustrations similar to this one, utilizing a unique visual style that sets it apart from other animated films. Just take a look at these other shots:

It’s visually incredibly creative, which is why you should definitely check this film out. If not for the visuals, then certainly go see it for the heartwarming story it has to tell, that carries a beautiful message.

Also, if you’re interested in writing a Here’s a Cool Shot about a shot you like yourself and publish it on this blog, please let me know via email (film4fan.wordpress@gmail.com).